Do a Jiggy Dance!!

co-authored by the Dynamic Duo
Illistrated by S.C.

A voice was heard in the distance, “Please, grant my wish. Give me a way to send a message to my father. I wish to tell him how much I miss him and how I have grown. I want to make him proud knowing that I care for our family every day.”

It was Jacob, a young boy from a seaport village. He was an average sized child for his age of thirteen. His red hair was messy and windblown. It was a chilly fall night so Jacob’s jacket collar was up around his ears and his hands were nestled in his pockets. He had just finished up at the docks where he cleans and repairs nets for local fishermen. 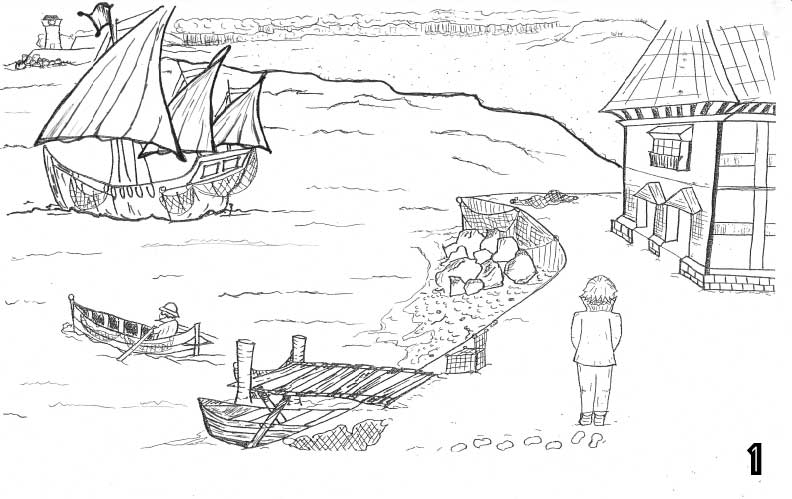 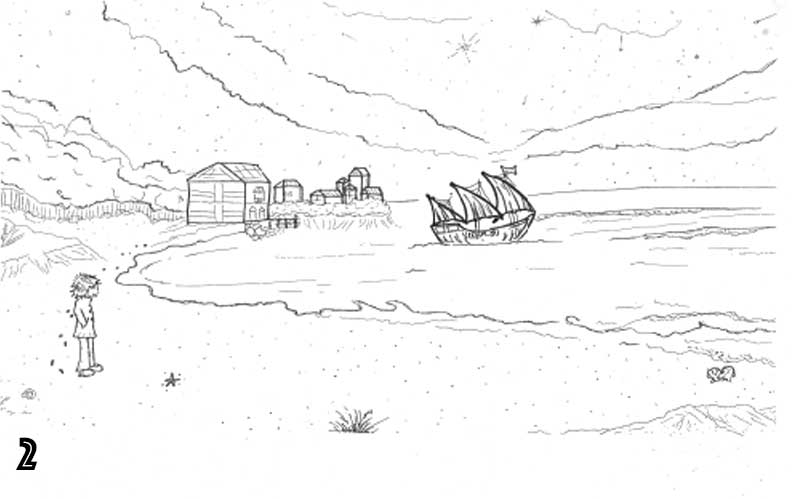 It had been a long time since his father, a mariner, went to sea to support his family. Jacob, the eldest son, was entrusted with the care of his mother and younger brother. Each night after work Jacob would speak with many of the returning sea merchants in the hopes of learning the whereabouts of his father or when he might return.

On the way home Jacob stopped by the shore to gaze at the star painted sky. Tonight, Jacob noticed a magnificent constellation. As he gazed upon it he wished for his father’s return. As if he had been heard, a star twinkled as though it was winking at him. Then the star started to zig-zag across the sky.

Suddenly it turned and began to descend. With a strange feeling that something wondrous was about to occur, Jacob stood perfectly still in a moment of amazement. The star seemed to be heading straight for him. As it approached it became clear that it was not actually a star.

As it got closer the star started to take on some sort of shape or form. The star lighted figure then landed with a soft thud in front of him. Shimmering just a few feet away from him the object began to move. 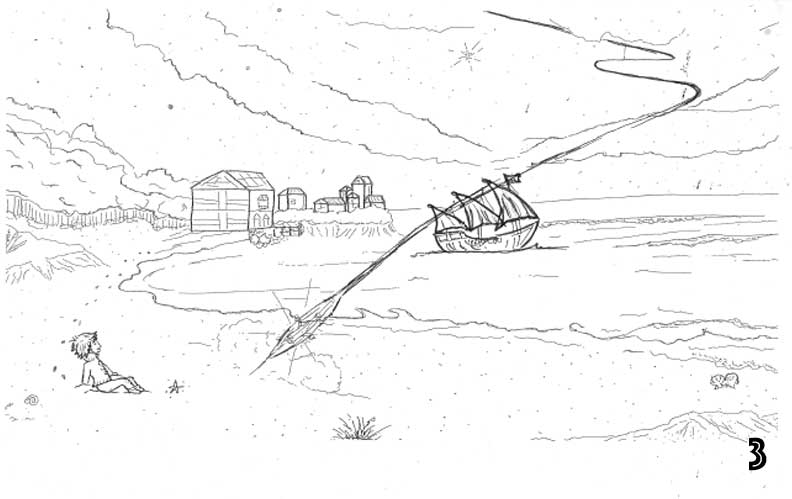 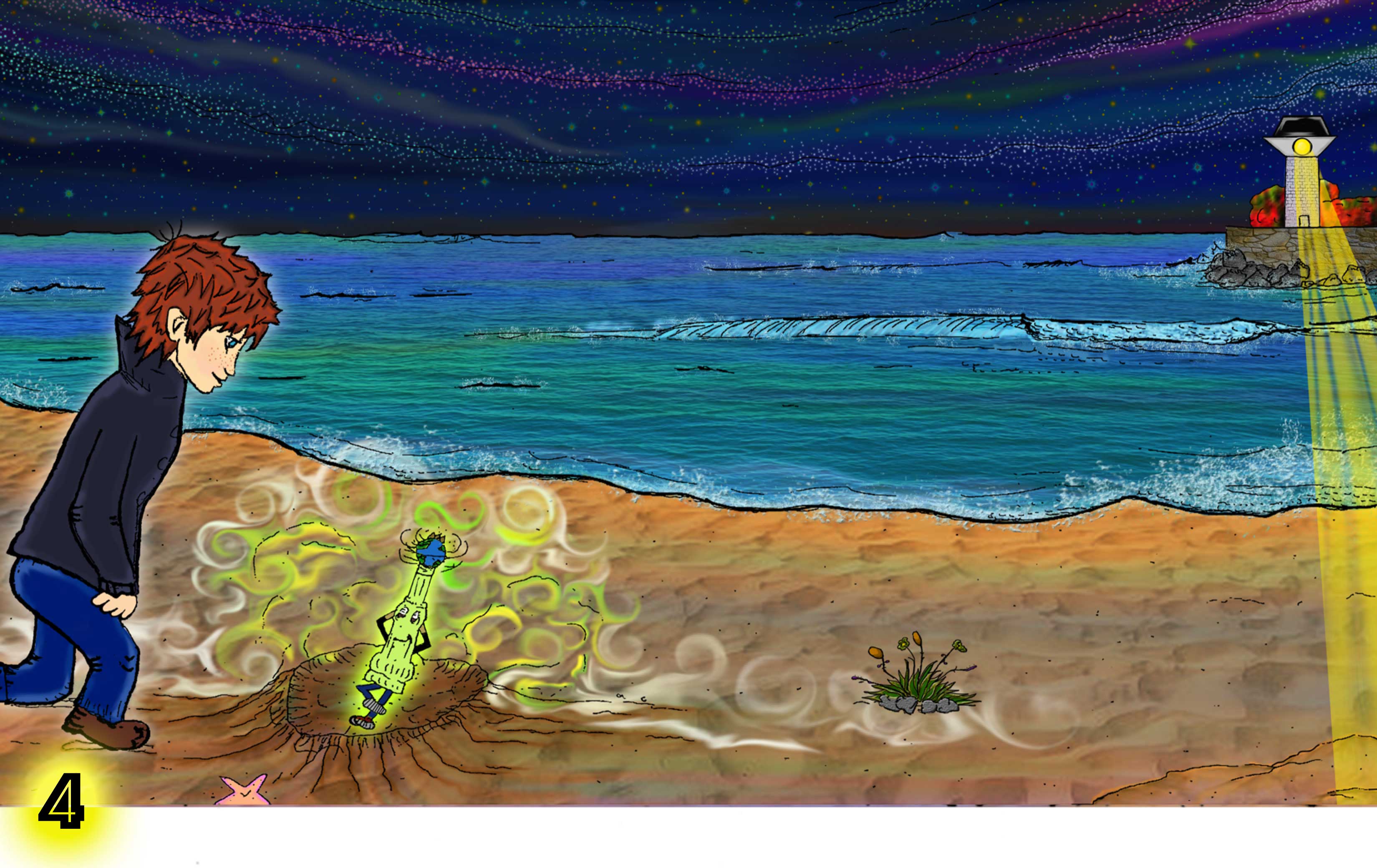 Jacob slowly approached the figure only to find that it was a small green bottle with twiggy thin arms and legs. The bottle had a round globe-like cork that looked like a spinning planet on top.

As it stood up Jacob saw two large eyes. The little bottle then winked and a warm goofy smile appeared on its face. All of a sudden it spoke.

“You can talk!” Jacob exclaimed. 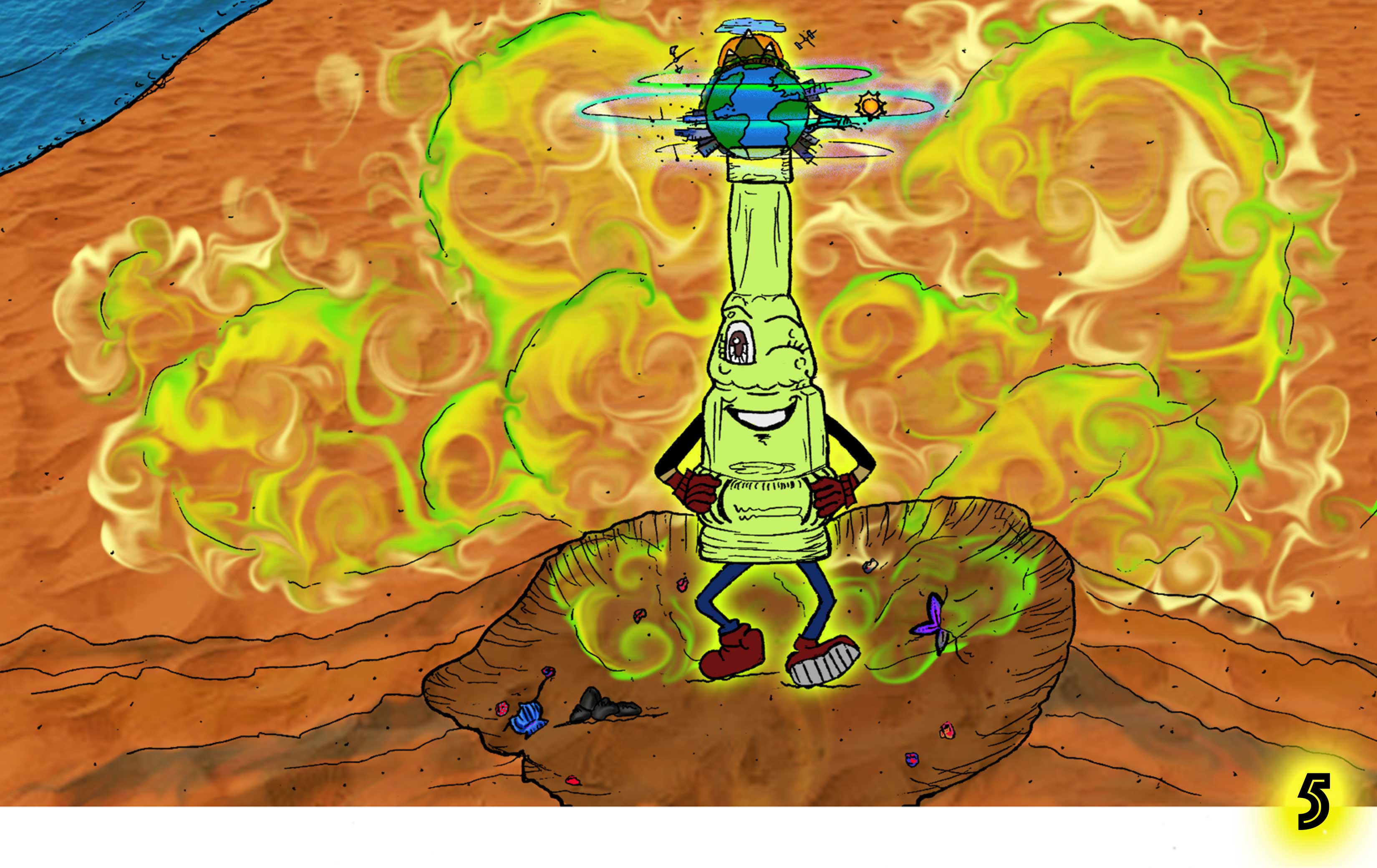 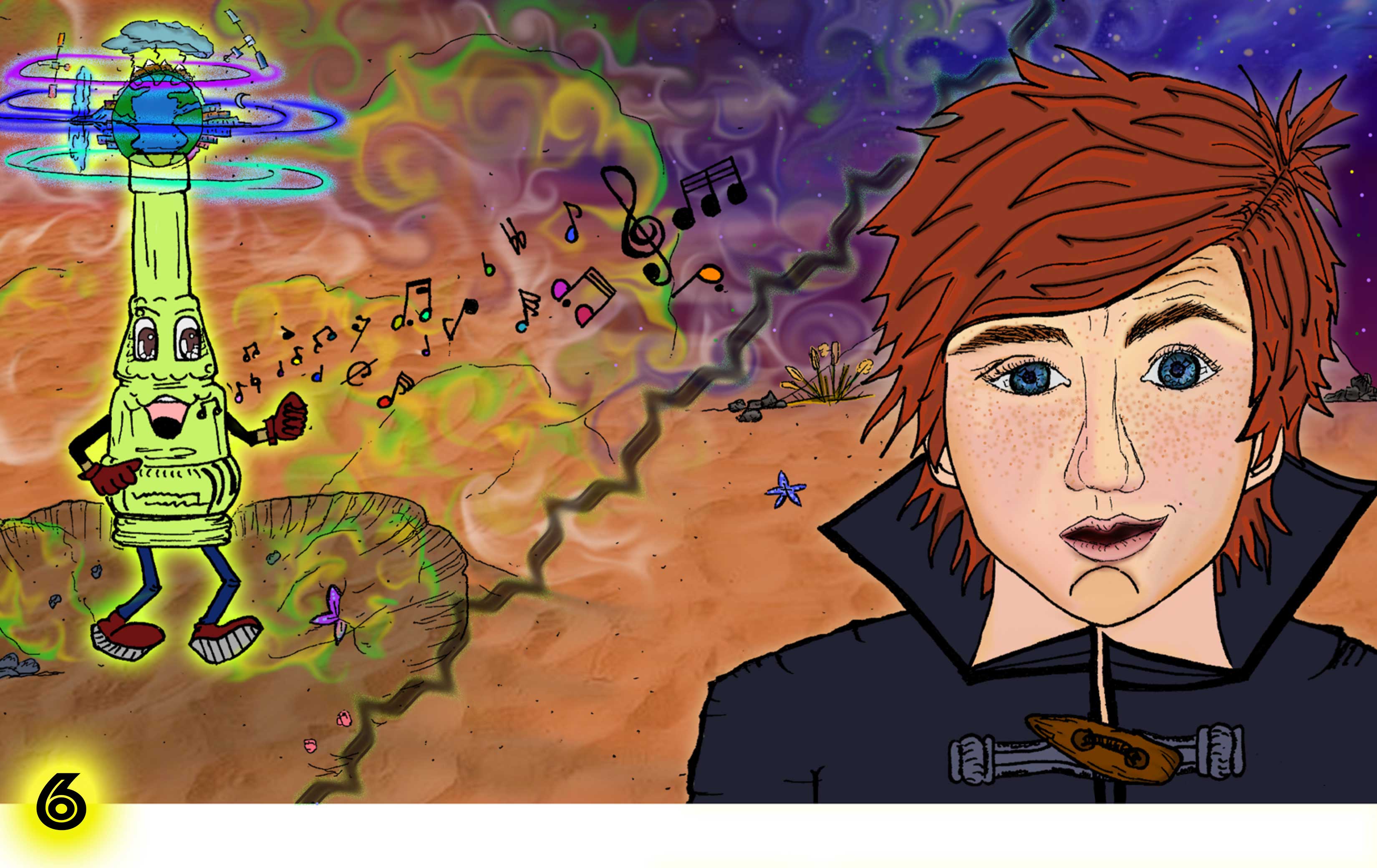 “Talk, dance, siiiiIIIIINNNNNGGGGGG!!!!” Tobias replied with a laugh. “I've come to fulfill your wish. My fellow messengers decided that I'm the man… well, the bottle for you.

“How is this possible?” Jacob asked.

Tobias explained that he is part of an elite group of twelve messengers called The InterGalactic Messengers. Their mission is to bring people together by delivering messages of hope and goodwill. Tobias told Jacob about Lady Josephine Boteilli, the first messenger born of original stardust during the creation of the Universe.

He continued the story about himself and the other messengers. Tobias detailed how they were created one by one with the help of Lady Josephine.

In the beginning formation of the Universe certain stars had special magical powers. Since Lady Josephine was the first messenger she had the ability to search out these stars and help create additional messengers. She continued to search out special stars one by one over the millennium of time and bring into being each of the eleven messengers as the stars formed and the galaxies settled into the universe we know today. 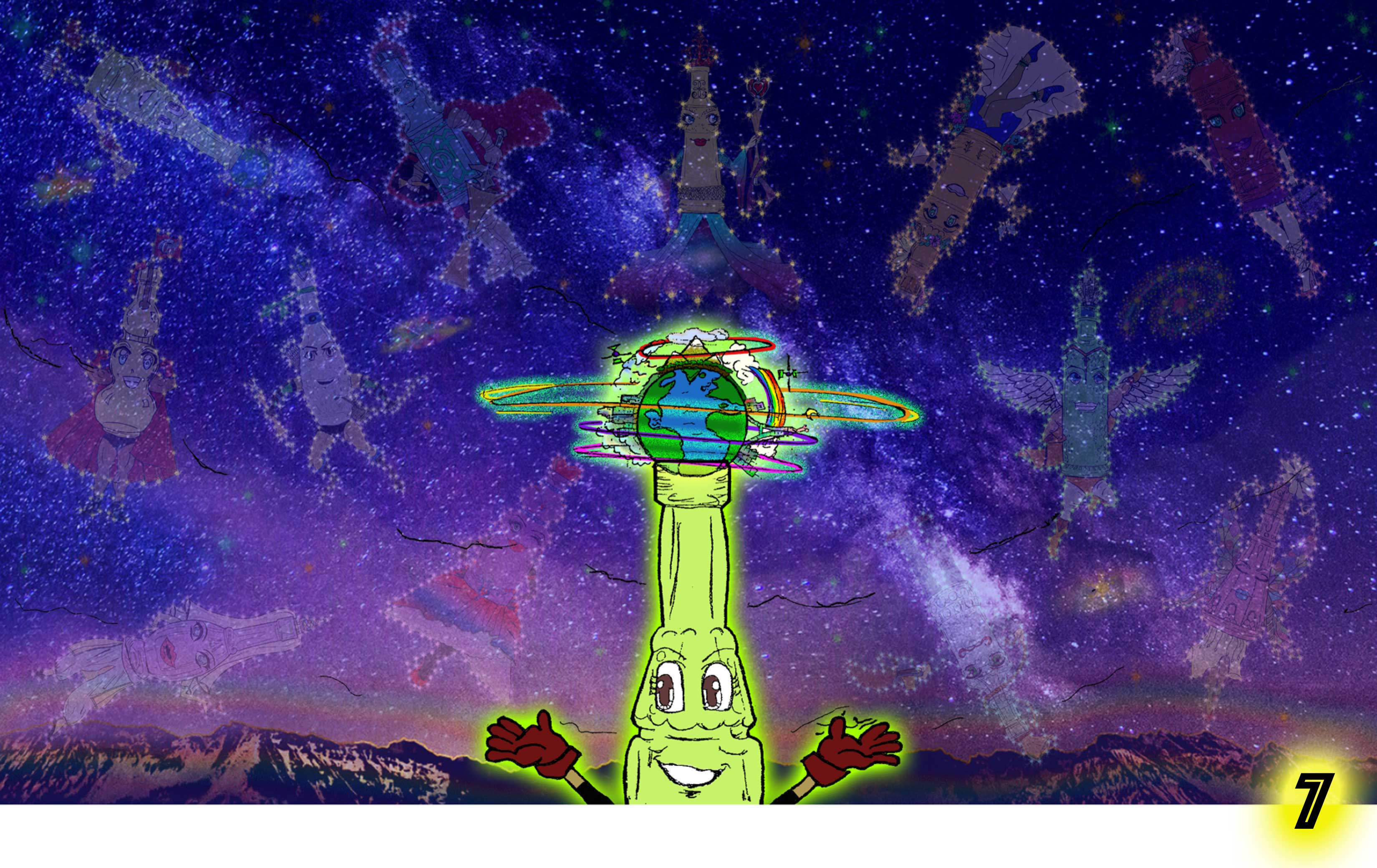 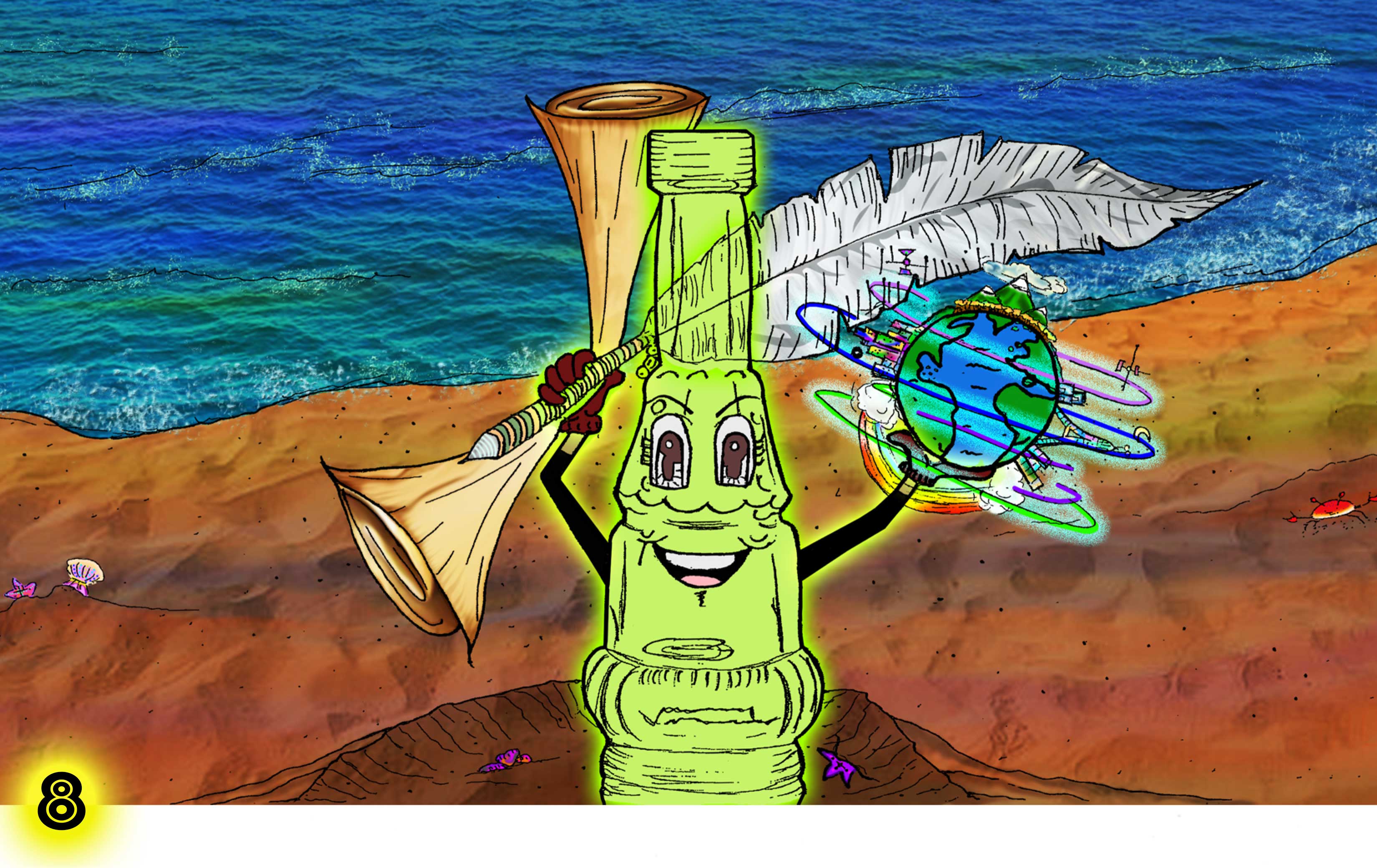 Although there was much more to this magical story, it would have to wait to be continued at another time.

Tobias said “It is now time for you to write a note to your father”. He popped off the globe-like cork on his head and pulled out a writing scroll and feather pen. Jacob took a moment to write to his father.

He sat on the shoreline and crafted the best message he could. He wished his father well and let him know he was missed and loved. He asked him to return as soon as he could and not to worry for everyone was well.

Jacob handed the scroll back to Tobias. 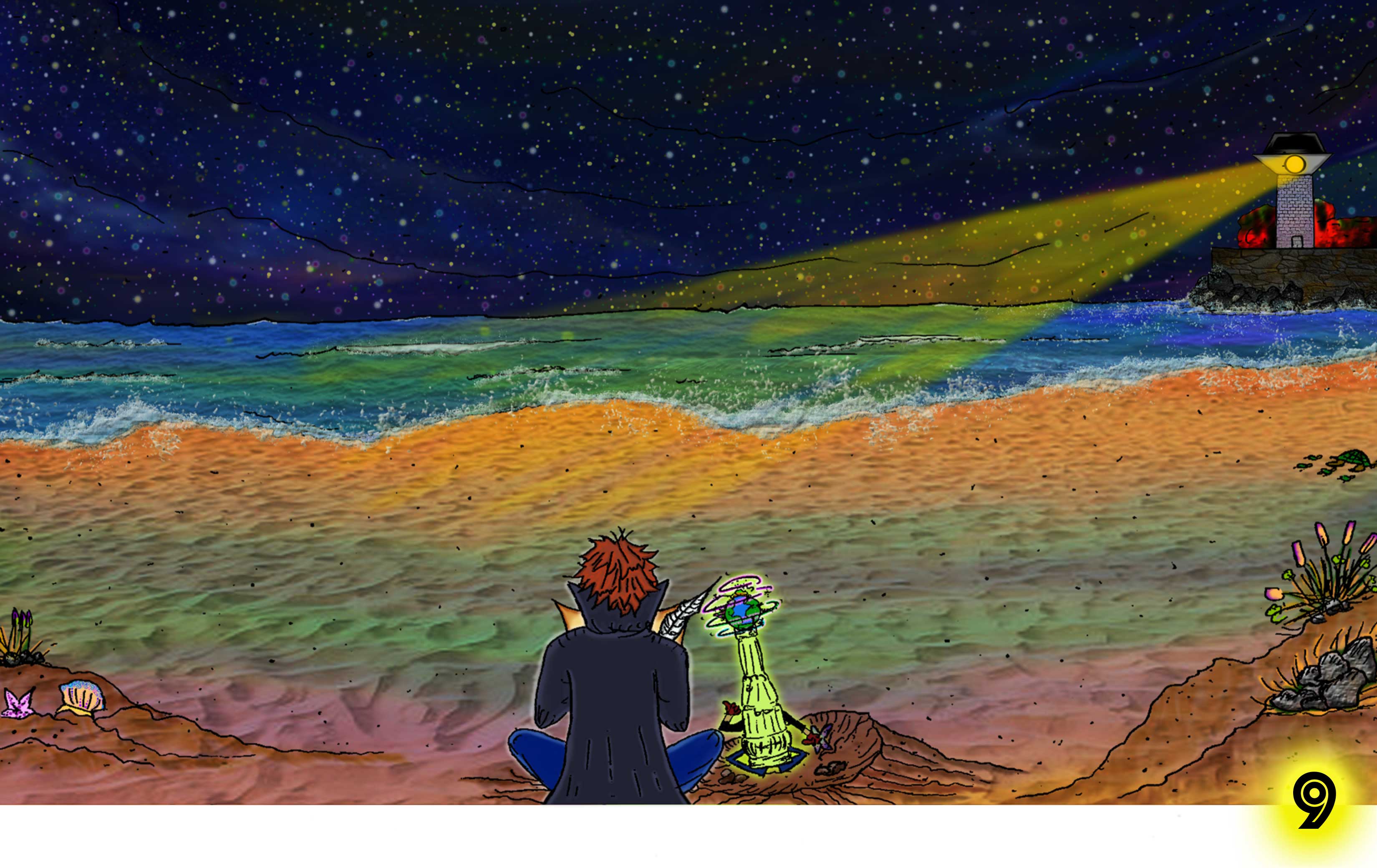 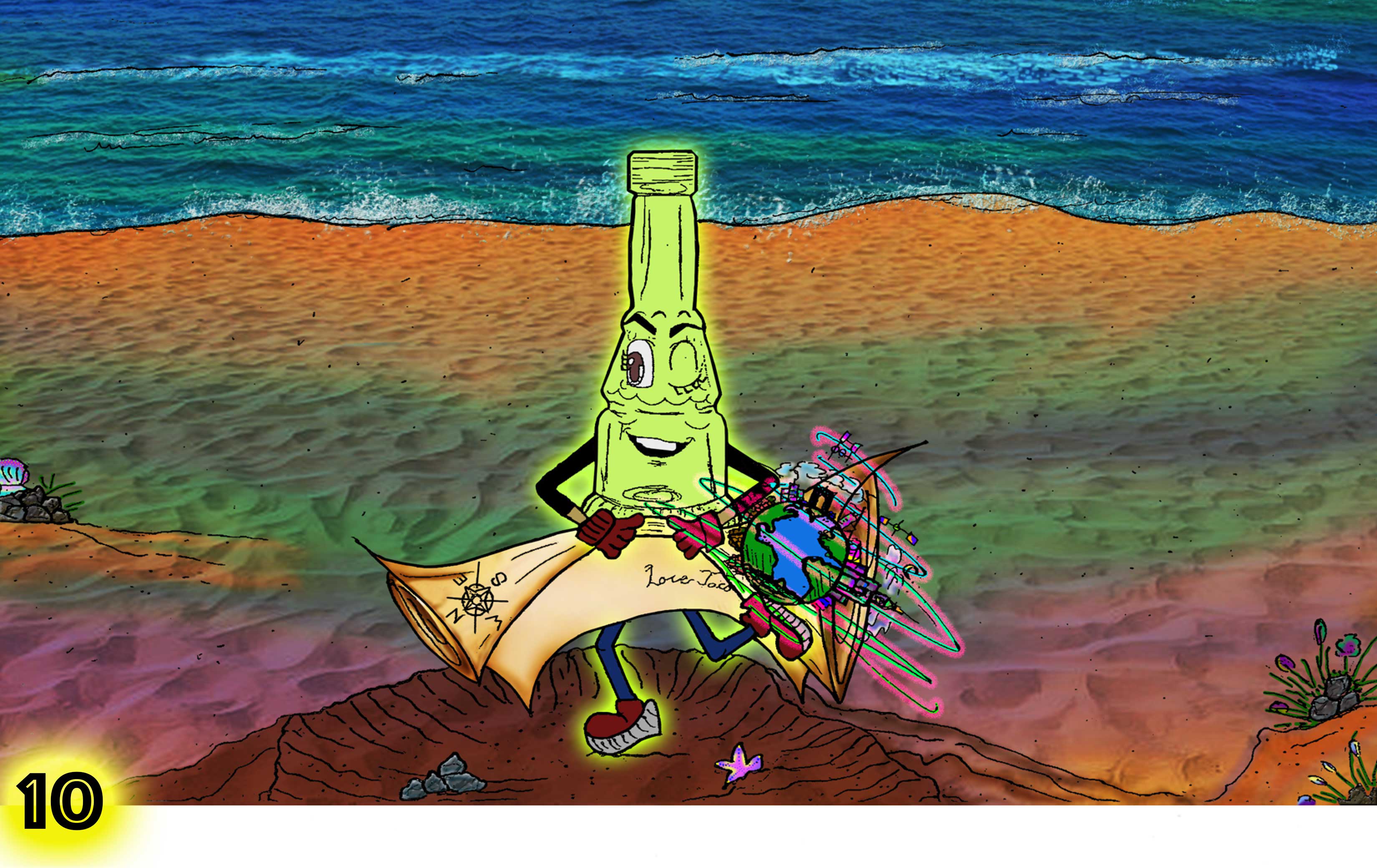 “Got it! Now I'll just roll this up”, said Tobias as he rolled up the scroll, inserted the message, and then put the globe-like cork back into place.

“Consider it delivered. I'm sure your father will be very excited to hear from you.”

“Could you also please give this to my father?” Asked Jacob, “It is a birthday gift I had intended to give to him upon his return.” 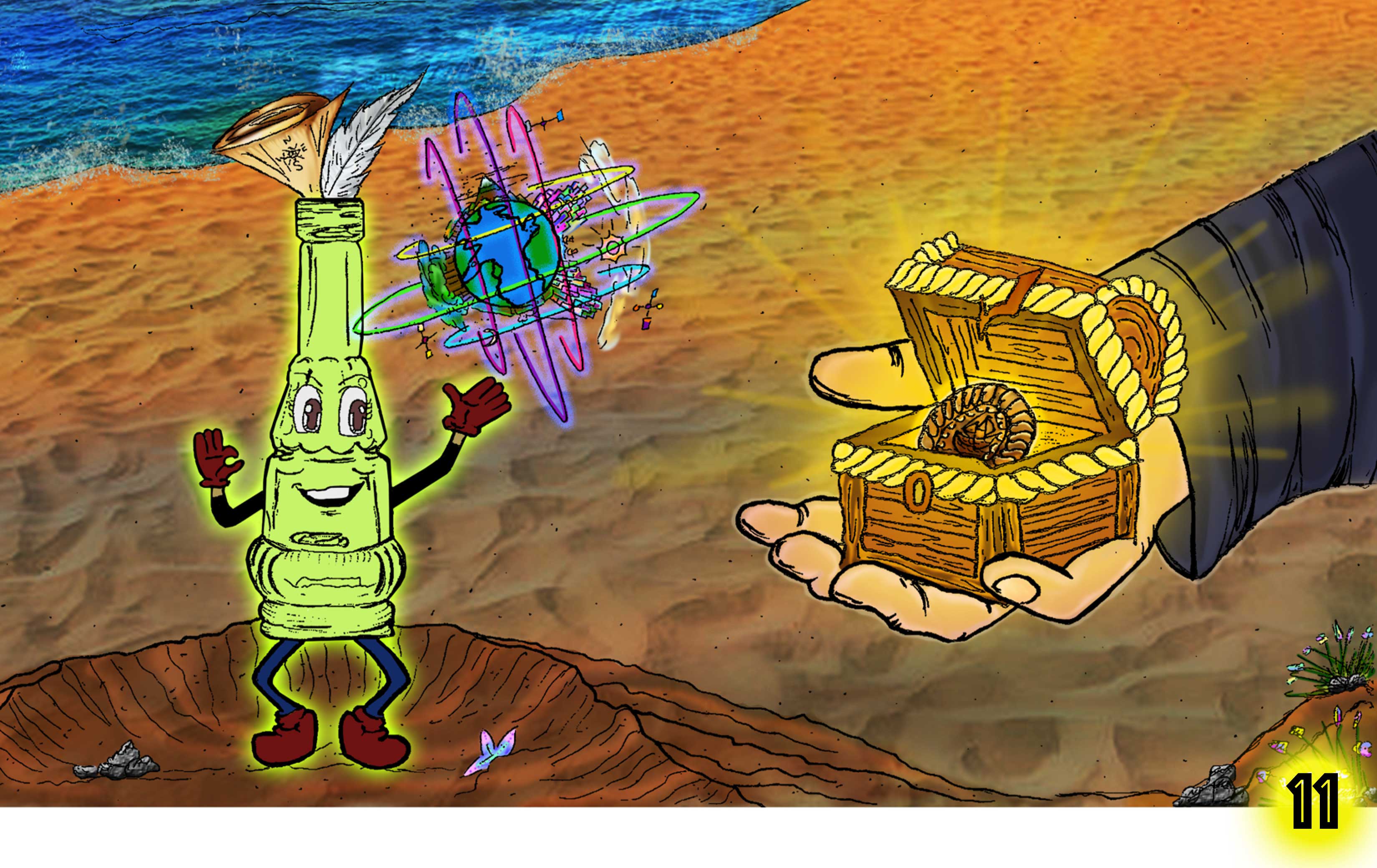 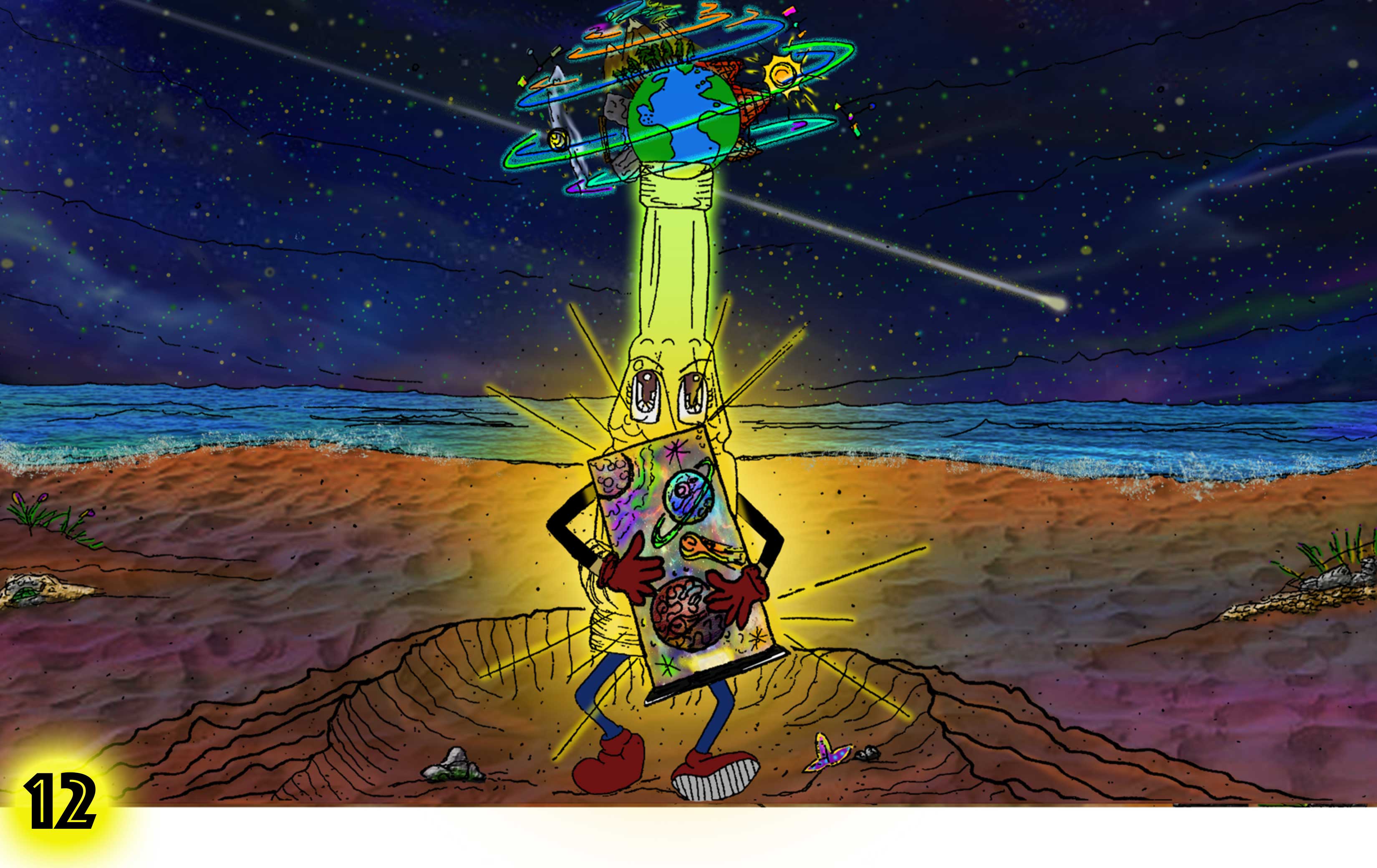 “Jacob, I'm a InterGalactic Messenger. It is my mission to carry out wishes for people in need”. Tobias proclaimed as he took the gift from Jacob. “Oh boy, look at the time! I better get going”, said Tobias. Before leaving Tobias handed Jacob a lantern.

Tobias told Jacob that whenever he needs to send a message just light the lantern and put it in his window. Tobias explained that the lantern was a beacon that would summon him or one of the other messengers.

Almost immediately after finishing his sentence, a beam of light appeared out of the sky and stretched down to the shoreline.

Tobias stepped onto the end of the light and the light retracted back into the sky. 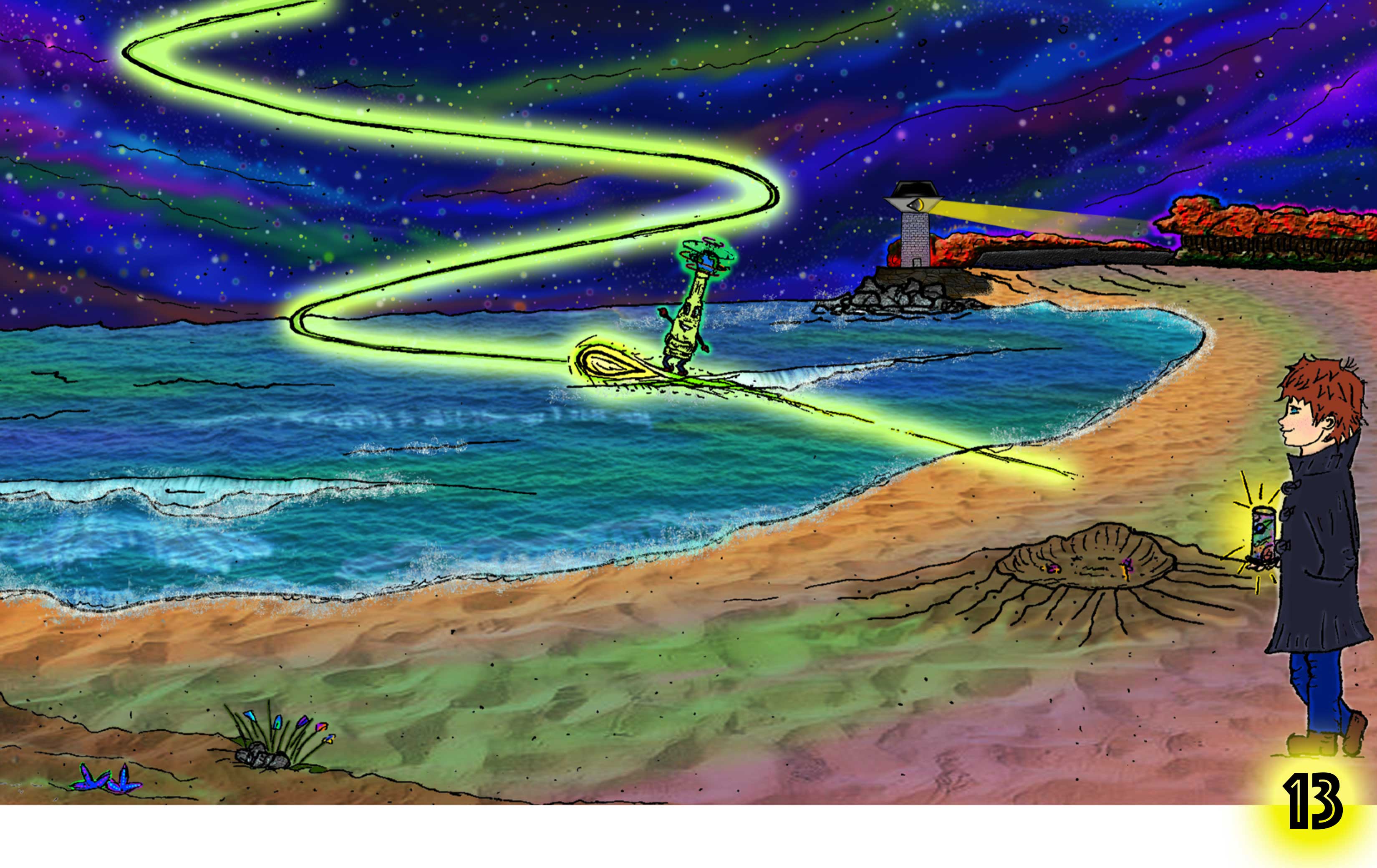 Up in the stars high, above the lands,
lies a set of constellations with messages in hand.
This is a story of the heralds, that be.
The InterGalactic Messengers, the ones that found me.

A prelude to the Celestrial Stories

You have found the fourth Moon

Question 4: Why does a person weigh much less on the moon?

Answer 4: The moon has much weaker gravity than earth.

You have found the fourth Jupiter

You have found the second Saturn

Question 2: How thick are Saturn’s Rings?